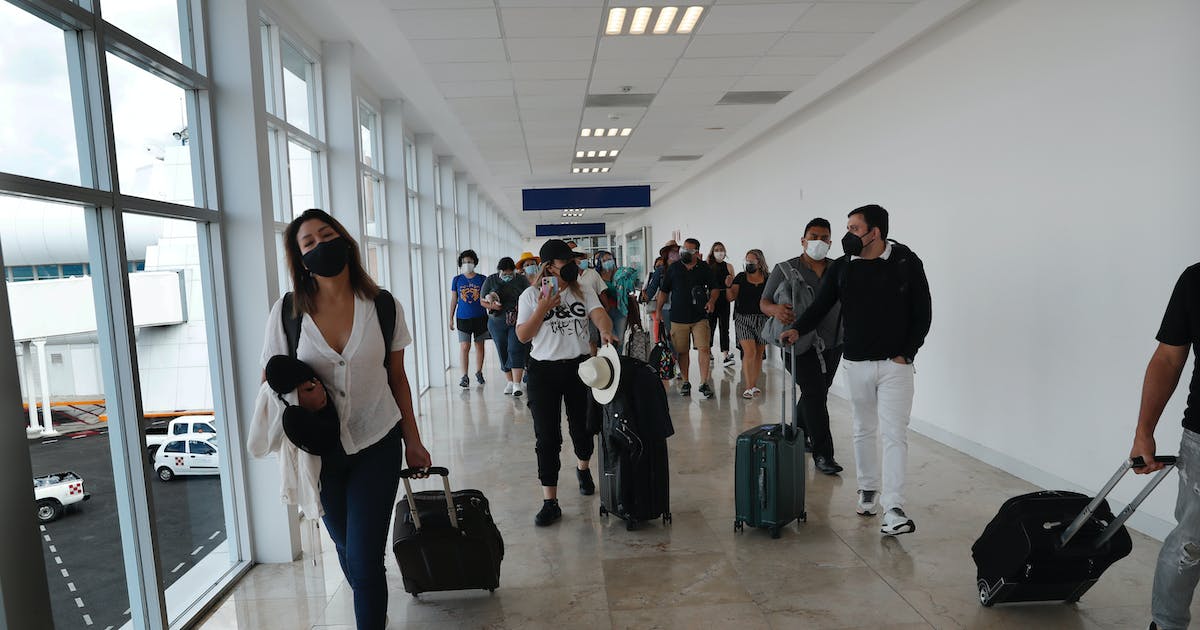 How many times can you be lied to in one day? Depends if you’re dealing with government, business or — in this case — both.

The problem began in Mexico. “It should be easy at the airport,” I told my wife. “Who’s leaving Cancun on a Monday?”

Well, everyone vacationing in Cancun, it seemed, plus 17% of the locals. I’ve never seen such a hellish crush. I’ve had nightmares in which I am trying to get to the airport, and something interferes. Luggage that shrinks to the size of a pack of cigarettes and is snatched by an eagle, boarding passes that turn into bananas, that sort of thing. But my subconscious has never come up with something as horrible as the sight that confronted me in Cancun. There was a line.

“So?” you say. “There’s always a line. You mean the one that snakes through the ropes to get to the bag drop? Pshaw.”

No, not that. This was a line to get into the airport.

Even better: There were two lines to get into the airport. Let’s just say they didn’t do an elegant zipper merge, either; more like enormous anaconda snakes attempting to braid into one entity with a thousand arms dragging luggage, to cite another nightmare. I wasn’t really worried, because I’d built in plenty of time, and our flight was delayed.

Two hours into the wait, though, I got another notification of a delay. We were supposed to leave at 7 p.m. Now we were leaving at 8 — a.m., that is.

We stayed in the line, thinking we might get vouchers for a cot or a bucket of warm gruel. Hah! No. The Delta clerk explained that this wasn’t the airline’s fault. It was because of the shootings and the explosion.

Wait a minute. The what? He explained: There had been a shooting at the airport, something had exploded, people had stampeded out of the terminal an hour ago, and the crush was the chaotic return to check in. Google it, he said.

Oh, I will, because apparently the airport and its constituent enterprises seem reluctant to tell anyone what’s going on.

As the day wore on, the official explanations for the airport nightmare changed.

Lie No. 1: A man, running to catch his plane, knocked over three poles used for queue formation, and people mistook the sound for gunfire.

Well, that’s plausible. People hear three clattering sounds of a pole striking a marble floor, followed by nothing else and assume “automatic gunfire,” whereupon they scream and flee en masse.

This was changed to:

Lie No. 2: A man knocked over the Bubba Gump Shrimp Co. sign, which somehow simulated the sound of multiple rounds being discharged. I saw the sign. It was lightweight, with a weighted base. You’d have to run into it full speed, and even then people would think a large sack of wet flour had knocked over a fern in a pot.

Lie No. 3: An X-ray machine exploded. Yes, because that happens all the time. People hear a car backfire, and think, “Was that an exploding X-ray machine?” I tend to think they don’t explode at all, but the next time I’m at the dentist’s and they put on that jacket while I get the pictures taken, I’ll ask if it’s Kevlar.

Also, this is supposed to make us relieved? An X-ray scanner exploding? It’s like saying, “Don’t worry, it wasn’t gunfire, just a baggage cart detonating in a shower of metal.”

So, what now? I made reservations at a hotel I could see from the terminal, and we joined a stream of Minnesota-bound refuseniks dragging their bags to find a bed. Sitting around the airport hotel pool that night, other Minnesotans described their experiences. A few had spent time hiding in a restaurant kitchen. General consensus: gunfire.

At the time I was texting with Delta to see if our required COVID test results would still be valid the next day. (They were.) I asked why the flight had been pushed off 13 hours, and was told it was because of “mechanical difficulties.” As I later learned, the plane had to land en route to Cancun because of reports of a Bubba Gump Shrimp sign falling over, and the crew had timed out. So that wasn’t true.

The fib-fest aside, it was a great vacation, and I have no qualms about going back. If only to hear their explanations the next time it happens:

“That wasn’t gunfire. A gate agent was microwaving popcorn next to the PA system.”